We got "the call" that my daughter was in labor the night before.  Being all about the food, I packed a memory stick with computer recipes and headed up I-95 early the next morning. Happy mother and father.  Beautiful "baby girl."  Me?  I was thrilled and relieved.  The next day, my all-about-the-food obsession kicked in.  I began eagerly planning the new family's first meals.  Eventually, another voice emerged: Why was I so worried about food at a time like this? Where was my foci on family, sharing, gratitude, and celebration? For guidance, I turned to literature, asking myself what the Great Books had taught me about food and family.
Literature offers us a plethora of notoriously bad parents. Is it a coincidence that most of these bad parents don't personally feed their children?  Maybe if they had, their families would have prospered.  One can only wonder if...
• ...the creature and Dr. Frankenstein would have become father-son owners of a tall men’s apparel store.
• ...Emma and Bertha Bovary would have played piano duets.
• ...Orestes and Clytemnestra would have buried the hatchet.
• ...Medea and her children would have joy-rided in the sun chariot.
• ...Mr. _____would have avoided Celie’s curse and eaten more than his own words.
• ...Daisy Buchanan and her child would have taken driving lessons together.
• ...Gulliver would have preferred dining with his family rather than the horses.
• ...King Lear would have been lying on the heath digesting his daughters’ holiday meal.

On the other hand, literature affords us examples of good parents who cook for their families and prosper.


• There's Mrs. Ramsay and her boeuf en daube. Well, she didn't actually cook it; but she did preside over the meal. OK, her children didn't actually attend the meal. But still, they saw their mother conducting a classy soiree, exuding hospitality.
• In the Odyssey, Penelope feeds her infants. Sure, thereafter she hands them over to the nursemaid.  And, true, we may not know if she's a wonderful mother. But we do know that she's the paragon of a faithful wife. That's close.
• The women in Lysistrata feed their children while successfully controlling the money and sex.  Many a woman's dream.
• As we watch Ántonia Shimerda in the kitchen baking for her growing family, we have forgotten her days as an unwed mother.

(I can't decide how to categorize Augustine's mother because there seems to be no record of Monica's culinary dis/inclinations. Regardless, trailing your adult son from one country to another and hounding him to convert is just nuts.)

With the Great Books empowering my meliorism* vis-à-vis cooking for your family, I planned 4 dinners according to two criteria:
1.  new parents need to eat healthy and often, quick meals; and
2.  new parents need simple meals to accommodate their new responsibility and schedules.

For the parents of newborn Em, I cooked the following during my visit.

Monday: We are joined by the baby’s Aunt, making this dinner for 4.
Salad Nicoise
I forgot to take a picture of this. So as Sophia Petrillo (The Golden Girls) begins every story, "Picture this"...a platter spread with...

1. slices of cooked tuna (Sear each side of the tuna medallions or tuna steaks. Their inside should be rare.)
2. small bowl of Kalamata olives
3. parboiled potato chunks
4. tomato wedges
5. hardboiled egg quarters
6. cooked green beans—still crisp
7. red onion slices
8. sliced carrots (These are not traditional for this dish but add color.)
Nobody wanted anchovies. And we didn't have them, anyway.

Each plate started with a pile of mixed greens. Everyone added from the platter and drizzled vinaigrette over. Another way to go is to mix the greens and the vinaigrette in a bowl, serving alongside the platter.

Tuesday:
Adapted from Ina Garten's Roasted Shrimp and Orzo.
This is what I found leftover in the frig after I realized that I forgot to take a dinner picture. One lonely shrimp. 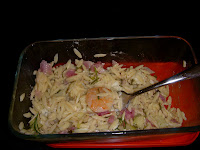 You can omit the parsley but not the dill. Instead of the feta, I used bleu cheese--for extra punch. This tastes even better the next day and the next. My son-in-law loved this. http://www.foodnetwork.com/recipes/ina-garten/roasted-shrimp-and-orzo-recipe/index.html

Corn and the Cob

Wednesday:
Blueberry Pork Chops:
You'd be surprised how subtle this dish tastes. Plus, there's the wow factor of pork chops and blueberries except for those who've eaten the Florentine beef version. Finally, blueberries are anti-oxidants. I adapted this from Rachael Ray's for Pan-Fried Pork with Blueberries: http://www.rachaelraymag.com/Recipes/rachael-ray-magazine-recipe-index/dinner-recipes/Pan-Fried-Pork-with-Blueberries

Season the pork chops with salt and pepper. Coat with flour.

In a large skillet, heat the olive oil over medium heat. Shaking off any excess flour, add the pork chops and cook, turning once, until browned, about 5 minutes total. Transfer to a platter.

Add the onion to the skillet and cook, stirring, over medium-high heat for 1 minute. Add the chicken broth and blueberries. Bring to a boil and cook until reduced by half, about 5 minutes. Stir in the butter and season with salt and pepper. Turn off the heat and return the pork chops and any juices to the skillet.

Serve with sauce over pork chops.

Swap it: Use chicken cutlets instead of pork chops. Or use with leftover pork tenderloin. 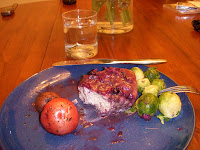 Dutch Oven Potatoes:
The key is the butter, oil, and spray combo: Add as little butter as possible for health purposes but enough to add flavor. Use only enough olive oil to give a coating of the entire bottom. To prevent sticking, the vegetable spray should be liberally applied.

Additionally, even though this is a simple recipe, it demands a close eye. So for new parents, I recommend the lowest setting to allow for distractions and prevent burning.

It's done when fork-poked soft—about 30 minutes if small or 1 hour if large. Again, the lower the temperature, the less you have to keep watching and shaking them.

Originally, they were packed tight. Here's what the pan looked like with the leftover oil/butter and thyme. 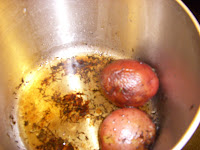 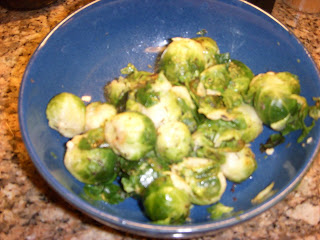 Thursday: The baby's aunt joined us again, making it dinner for 4.
Spinach Salad
I didn't use eggs. http://www.foodnetwork.com/recipes/alton-brown/spinach-salad-with-warm-bacon-dressing-recipe/index.html

Pizza:
Spread out Pillsbury pizza roll on a cookie sheet sprayed with vegetable oil.
Smear tomato sauce all over.  Sprinkle with...
Top with low-fat grated cheddar and mozzarella cheeses. 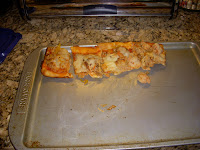 *Meliorism: belief that the world tends to improve and that humans can aid its betterment [from Merriam-Webster online]
Posted by justme at 9/26/2009