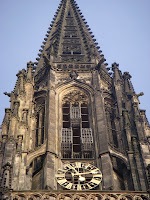 Munster's St. Lambert's church.  Can you see the cages in which they murdered 3 Anabaptists by exposing and starving them?  Thankfully, modern Munsterians have altered their alterity issues.

I’ll stand by this statement despite one of my student’s dismay: The Germans are an hospitable people. I didn’t say that they wre friendly folk. No, you won’t see many people walking about smiling, joking, or laughing. But when it comes to hospitality, they get an “A” from this professor. Let me relate a few anecdotes.
Go to any beer house, order a beer, drink that beer, and watch it magically appear re-filled. You don’t have to ask but you can refuse. Nobody seems to care either way. And at said beer house, you’ll sit and eat “family-style.” One night, we ate with two guys on business from Romania who were revisiting the restaurant, intent on reordering their previous entre. With one “English menu” and one English-German dictionary among the four of us, it was clear that the Americans sought far more control over their ordering than the Romanians who repeatedly shrugged, laughed, and happily resigned themselves to whatever came to the table. We offered each other samples from our plates and swapped travel stories. We laughed, we drank, and we chatted for an hour or so. Although you might contend that this hardly supports my declaration that the Germans are an hospitable people, it sure seemed that way at the time as every other table I could see was having the same kind of light-hearted experience. Even in an Alsatian bistro, you’d likely not find such a jovial mood permeating a restaurant. 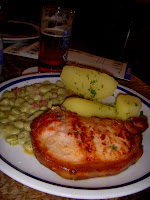 This is my husband's pork chop, roasted potatoes, and lima beans meal.

Walk in a shop and you’ll be greeted with “Good Day.” You’ll be asked if you need help. You’ll be allowed to browse until you’re ready to buy or leave. No pressure. No hassle. Leave the shop and you’ll hear, “Good Day” again. You'll likely not see any smiles accompany these greetings.  But you'll likely experience a pronounced sense of civility and courtesy. Many countries practice such a pair of shop greetings.  However, often there's an erosion of hospitaity in the attitude.  Who hasn't suffered the typical French practice of having their pronunciation corrected when you return their greeting? 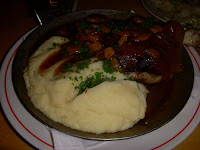 This is my pork leg and mashed potatoes meal.  You couldn't ask for better.
We took buses in Munster. On our first trip, our bus driver figured out that we wanted to come back via the bus but couldn’t figure out if we wanted a round-trip or all-day pass. We couldn’t figure out what she was trying to figure out. Well, when she requested more money than I expected, I figured we’d gotten more than a round-trip ticket. One bus stop later, the bus driver started waving an open cell phone at us, gesturing that we should talk into it. Now, just who could be calling us…on a bus…in Munster, Germany? No one. She had called to find someone who spoke English so that we would be sure to know that she sold us an all-day pass. Even the Irish, some of the friendliest folk I’ve ever met, wouldn’t do that. 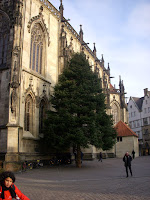 Here's Munster on a sunny winter day.
My last bus driver took a different hospitality tack. Refusing to accept my coins into his hand, he barked that I should deposit them on the silver tray. Then, he barked that I shouldn’t take the ticket from his hand, pointing again, to the silver tray. I must have looked angry, and I was because his attitude seemed unnecessary. So he explained the rationale for his instance on the silver tray. It’s so that each party can view the transactions—the coins and the ticket. I admitted (to myself) that that made sense. Plunked down in my seat, riding into town, I thought about how hospitality isn’t strictly about friendliness but more accurately about a script that allows different peoples and cultures to communicate without offense and with confidence. I intended to get off at the Domplatz, which was one stop past the Prinzipalmarkt on my way home. So I let the Prinzipalmarkt stop pass me by…but no Domplatz. After a while, I was at the train station, then, out of the city and striding into residential, then, farm areas. Well, I figured that I had an all-day pass and nothing else to do, so I’d just sit on the bus until it looped back. Confidently enjoying my sojourn, I was suddenly faced with my bus driver who announced that we’d arrived at the end of the line and that I’d have to get off. Where, exactly, he wanted to know, was I hoping to go. In the interest of time and saving a bit of face, I replied that I was enjoying seeing where people lived until I went to the outdoor market by the cathedral. No matter. It was still the end of the line and exile awaited me. I got up, got out, and stood outside the bus…as did he, announcing that he had to use the toilet and would be back to drive the route backwards. At that point, I realized that he was a bit embarrassed. Of course, I waited for him, assuring him that I’d protect his bus. He actually smiled. When he returned, I asked him to point out our location on the big map plastered on the side of the bus. For 5 minutes, he tried to find the #14 bus line. Not only couldn’t he find that line, but he had no idea where we were. He knew only the route, not the city. I asked him if we were lost. He actually laughed. Back on the bus, we began to chat. He asked me questions about why I was in Munster and why I’d come not knowing any German. He told me where I needed to get off the bus. I figured that there wasn’t much point in convincing him that I knew the stop, given my hour-plus detour. Tentatively, I asked him questions about how long he’d been in Munster, why he left Ghana, and if he thought of himself as African or European. We conversed sans any gruffness on his part and any defensiveness on mine. This went on just until another passenger arrived. Then, it was back to being Mr. Bus #14 Driver. But when we finally approached Domplatz, I saw his eyes lift to the mirror, checking if I was getting off for the outdoor market. Approaching the exit behind me, I heard him say, “Good-bye” in an accent I gathered came from his roots in Ghana. What I thought just then and have been considering since is the difference between hospitality and friendliness. If I had to count on one of those, I’d prefer hospitality--even with all its rules and nuances. Hospitality is, I discovered, the script for the shy and the unfriendly alike. 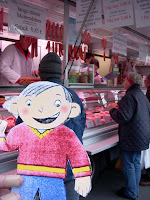 Here's "flat Stanley" at the Dom outdoor market.
At the university, my husband and I were both struck by the hospitality between students and professors. Each makes and grants requests with openness and respect. In one sense, their relationships seem more relaxed than their US counterparts; in another sense, their relationships seem more professional. They drink together but don’t joke together. They exhibit a reciprocity of duties and favors much like the fealty code but without the flyting. They seem less personal but more civil than most US professor-student relationships that I’ve experienced. They seem less friendly but more sincerely hospitable.
This ends my tribute to German hospitality. Feel free to weigh in on your experiences.
Prost!
Posted by justme at 1/28/2010