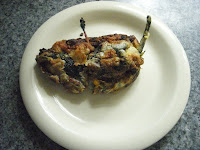 After an awesome meal of chile rellenos at my step-daughter's apartment, I decided to revisit this Texan favorite, attempting to remove it from my kitchen disaster file.  Searching the internet, I found a recipe, courtesy of Ann Hazard, which I adapted because I wanted meat. Unfortunately, I had no ground beef in the house (scandalous!), but I had lamb patties.  Hence, the reason for the substitution.  I'm breaking this recipe's steps into 2 categories: 1-2 days before and pre-eating.  The proportions depend on how meaty, cheesy, or beany you prefer.
1-2 days before:
1. Making the filling...
Sauté some chopped green or white onions. Remove from the pan.
In the same pan, cook your ground lamb.
Add onions back in and some refried beans to lamb. Cook on low until warm.
Refrigerate to cool.
2. Charring the peppers...
Coat the poblano peppers with oil, place on a sprayed rack on a sprayed baking sheet, and broil until charred all around (turning).  Don't chicken out.  Get 'em scorched.
Remove from oven with tongs and plop into a paper bag.  Roll up to seal for 15-30 mins.
Remove from the bag and peal off the skins.
If there's a puncture from the broiling, use that place to cut from below the stem to the narrow end.  If not, pick a spot and slice.
Leaving on the stem (for presentation), remove the seeds and membranes unless you're a fiery guy.
3. Stuffing the peppers...
Nestle a wedge of some variety of Mexican cheese in each pepper. Don't use shredded cheese. This is the secret to sealing the pepper and keeping it closed during the frying.
Pack the remaining area with the filling.
Close and suture with toothpicks, driven through the wedge.
Refrigerate.
Pre-eating:
4. Concocting the coating...
Separate 3 eggs--> whites & yolks.
Whip the whites until stiff.
With a fork, combine the yolks.  Add 1 TBL. flour and a pinch of salt.
Fold the yolks into the whites. Be gentle.  You'll have an opportunity in a minute for an aggression release.
Roll each pepper in flour and then cake in the egg mixture.  You must be a stern disciplinarian, forcing the egg mix to play well with the flour coating the pepper.  That sad, just do your best to slather as much on as you can.
5. Frying your masterpiece...
Heat peanut oil--enough to cover the bottom half of the peppers.  Peanut oil is the best because it withstands high heat.  That means less smoke in your hacienda!
Fry the peppers until golden, turning once.
Remove and place on that sprayed rack on baking sheet.  You can keep warm in a low oven if you need an hour.
6. Spicing it up with the Salsa...
Make your own (tomatoes, garlic, salt, avocado, onions...) or use store-bought.
Serve with rice and the salsa.
The recipe that inspired my variations is posted on http://www.mexgrocer.com/534-killer-chiles-rellenos.html.
Posted by justme at 3/13/2010