The Blind Side's Vision of Hospitality. 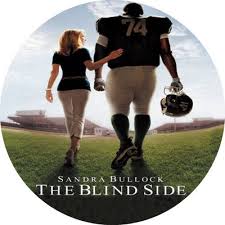 Over and over, Hospitality Morality has struggled with two hospitality philosophies: risk vs. reciprocity. Should the host--as the early Christians, ancient Greeks, medieval Europeans, and a host of modern philosophers contend--extend hospitality at potentially great risk and without return? Or should the host—as contemporary etiquette books, the travel industry, and Hollywood movies argue—maintain a modicum of control and expect gratitude?

Here’s a quick montage of scenes from the opening of The Blind Side that present the hospitality risk vs. reciprocity dilemma:

• The movie begins with Lawrence Taylor breaking Joe Theisman’s leg. We see this 3 times. Strictly speaking, maiming, disfiguring, and killing an opponent is a breach of sports hospitality. Even for pugilists.

• Because of that injury, the second highest paid football player became the offensive left tackle, who is programmed to protect the quarterback. In case you miss that hospitality is tied to capital, the voiceover metaphorizes: as every housewife knows, the first check pays the mortgage and the second check pays the insurance. To protect, according to this scenario, is to protect against financial ruin, rather than to protect one’s integrity, for example.

• The third scene features Michael Oher (whom we’re meeting for the first time) being ushered into a conference room by a woman in business attire who emphatically excludes another woman who looks like she owns stock in Stein Mart. That woman and Michael are decidedly unhappy. No hospitality there. Further, when Michael is seated, it looks as if his legs won’t fit under the table. Thus, emotionally and physically, he has not been welcomed into an investigation that purports to protect his desires.

• Two Years Earlier: A beat-up car drives through a run-down neighborhood amidst litter, a collapsed home, and a (homeless ?) man pushing a shopping cart down the street. This is about as far from the Norman Rockwell painting displayed later in the movie as you can get.

• Next, we see a mechanic beg a coach to influence the administrators of a private Christian school to accept his nephew and a boy named “Big Mike,” whom we recognize from the conference scene. Why would the coach stick his neck out for this man and these kids he doesn’t know? Well, explains, the mechanic, there’s money to be made and there’s a football program to benefit. No pretense of hospitality.

Let me speed things up here because I’m not at the end of my first of nine pages of handwritten notes. And my one or two readers are not going to hang in much longer for me to make a point of all this.

When you afford someone else—the Other or others—hospitality, you take a risk. How big your willingness to take that risk depends on your philosophy of hospitality. The risks you're willing and unwilling to take affect every relationship between hosts and guests.

The Christian school’s football coach (as host) invites Michael (as guest) to join the team. Almost immediately, the coach laments the risk that he took badgering the administrators to accept Michael after it appears that Michael won’t hurt anyone on the field. Mrs. Tuohy excoriates the coach that he needs to get to know his players. According to Mrs. Tuohy, a coach/host can prevent a failed relationship with is player/guest if the coach/host would only acquire the necessary information, which in this case, is Michael’s score at the 98th percentile for protectiveness. While at first this scene suggests that getting to know your players/guests will guarantee success, upon reflection, this constitutes a “just the facts” approach to relationships and no face-to-face encounters that Martin Buber advocates.

Let’s pause to consider this interesting aspect of the risk side of the dilemma. At what point should you try to see the horizons (Gadamer) or search another's face (Buber)? At what point do you accept someone else’s background, vision, and gaze? Before or after the invitation to host? If before, risk is minimized. If after, risk is maximized. If you're not convinced, I recommend rereading the Odyssey, Huckleberry Finn,  Medea, and The Metamorphoses.  HM does, however, grant that not everyone is cut out to be Philemon or Baucis.  But the point here is that not everyone aspires to be so trusting.

The school selection team members know little about him because his records are so incomplete; they accept/host him because they want to do “the right thing.” Their risk is huge.

The mechanic and his wife have taken in Michael on a temporary basis. It appears that they know Michael, so their risk seems minimal. However, the wife challenges the husband’s decision to host Michael rather than spend time with her. Spilling over a couch haphazardly made for his sleeping, “Big Mike” hears them arguing about dumping him at a shelter the next day. They are not willing to risk disrupting their home. Calling him “Big Mike,” we later discover, is the movie’s clue that they don’t really know Michael.

The teachers also don’t know Michael. Several times, they reduce “Big Mike” to a set of academic scores, bickering among themselves about the extent of his lack of potential. Only one teacher is curious to understand Michael. She gradually converts most of the others to reconsider their assessment methods. Getting to know Michael, these teachers become willing to risk discomfort and conduct oral exams. Only one teacher holds out, inflexibly expecting Michael to adhere to his syllabus.  Or maybe he has high standards and a strong sense of equity.  Hard to tell.

The whole college recruiting process fails at hospitality. On the one side, they esteem Michael only on the basis of his game videos and his football stats. The coaches couch their recruiting spiels in hospitable terms but only for financial gain and career reputation. On the other side, the Tuohys only perfunctorily escort these coaches into their home, that is until the Ole Miss coach arrives.  Yet even the welcome for the Ole Miss coach fails at hospitality because still in the entry way, Mrs. Tuohy coaches the coach on how to pursue  Michael rather than how to get to know him.

Many more scenes—Michael’s mother’s place, the gang’s den, the Laundromat, the cafeteria, the library, the restaurants, the tutoring session, the DMV desk, the social services office, and the cars—depict hospitality gone bad for one of two reasons: an inability to take a risk or a failure to authentically view another person as a human being.

The growing hospitality tensions in the movie culminate when Mrs. Tuohy asks her husband if she is a good person. He assures her that she is the best person he knows. Why? Because everything she does is for others. Uncomforted, his wife inquires why she lives that way. Her husband rails back that he has no clue. The question of why she is so hospitable remains. Michael, clearly no limpet despite his poverty and orphan-like state, stands his ground.  He demands a more thorough explanation when he suspects their inhospitality: “Why’d you do it?” “Was it for you or was it for me?” He repeats Mrs. Tuohy’s earlier threat: “Don’t you dare lie to me.” However, unlike her, he walks away, leaving the question unanswered. After a brief meandering and uncharacteristic muzziness, Mrs. Tuohy self-reflects and begins to answer the question. She concludes that she is culpable of subservance.  She has always wanted Michael to play football for her alma mater.  Without the blinders limiting Michael's life to that singular vision, Mrs. Tuohy realizes her more grievous error: she is not generous, and thus, possibly, not good.  HM is eager to relate her lack of disinterested self-righteousness to hospitality, noting that Mrs. Tuohy expects the ultimate reciprocity from her guest--his blind adulation.  She has been that puissant host unconcerned for her guest's preferences but obsessed with her own control.  She has never once considered or inquired how her guest sees himself and what he wants for himself. She, like the leader of the Light Brigade, has erred. But unlike the leader’s men, Michael does not follow. He does not sacrifice his self-image and vision for his future. When Mrs. Tuohy finally and truly follows the advice she’s given his high school coach, she asks Michael what he wants to be and to do. Further, she promises Michael that she will support his self-concept and decisions. She gives him permission to self-actualize; and by doing so, self-actualizes herself. (Oops, I slipped into my other blog.) Mrs. Tuohy, taking the ultimate risk for any parent, also takes the ultimate risk for any host by assuring her guest that he can be himself.

It may seem a payoff for Mrs. Tuohy’s hospitality that Michael chooses Ole Miss in the end. But the movie rejects such a suspicion when it returns to the conference table. Growing more confident, Michael berates the obdurate NCAA investigator for never asking him why he chose Ole Miss. Perhaps, the movie berates us for our own assumptions about his choice. We and she should have inquired more thoroughly. Michael explains his decision in terms of reciprocity: it’s where his family has gone. He means, of course, Mr. and Mrs. Tuohy. The accusation has become the embrace. The reciprocity of hospitality extended with maximum risk has become protection, gratitude, and loyalty. He chooses them--his family--just as Mrs. Tuohy has learned to choose him—that is, apart from gain.

Why do we treat others well? Why do we risk being maimed, robbed, rejected, and ridiculed—all effects of hospitality in the movie? What Mrs. Tuohy and Michael learn is that sometimes the risk to understand and accept another person on his or her terms can create that rare friend that Aristotle describes as a soul mate. HM rejects Mrs. Tuohy’s final voiceover crediting God and Lawrence Taylor. Rather, HM gives credits Michael’s success and, more importantly, the “start of a beautiful friendship” to host and guest.  With their last "proper hug," host and guest embrace but do not fuse.  They will grow--apart from each other--but not apart.  There will be more risks to take and much more to learn about each other.  But if they continue to risk and explore, they will continue to be good people.  Such is the goal and the gain of hospitality.
Posted by justme at 7/31/2010