grabbing Thanksgiving when you can...(Hospitality EVENTuality) 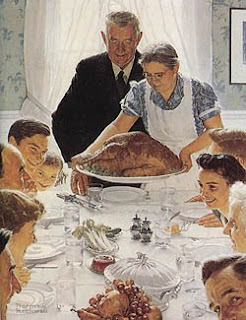 No one’s coming for Thanksgiving day. So I grabbed a pre-Thanksgiving opportunity to cook when many of us found ourselves together in DC--for various reasons. The meal's menu didn't resemble traditional Thanksgiving fare. However, the euphony among the chef, sous chef, and champion pot scrubber recalled the usual Thanksgiving kitchen preps.
The menu:
cheese 'n mac
steaks
mashed potatoes
shrimp
asparagus 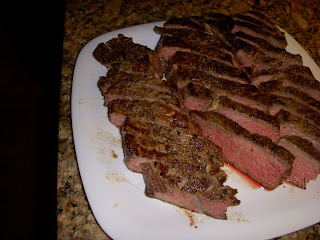 I wish I could convey how to cook this steak, but I didn't cook it.  How our chef does this without a thermometer and made to order per his guests' preferences is amazing.

I don't want to review the whole menu because I'd rather just address the issue of rescuing a few dishes as referenced on the unequaled blog www.eatsmeatswest.blogspot.com.

The mashed potatoes: J. ruthlessly peeled and precisely cut the white potatoes and 1 sweet potato. They were cooked in water; drained; and doctored with, I think, chives and some kind of milk or cream. Still bland, according to our chef. Responding to his appeal to "fix it," I did what (according to the recent New Yorker food issue) most restaurants do with their mashed potato dishes: I slathered in a generous helping of butter. That worked. 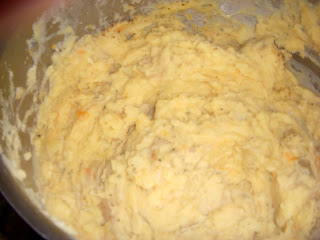 Notice the color due to the one sweet potato addition.
The shrimp: I'm a simpleton when it comes to cooking shrimp, preferring to roast it with olive oil, salt, and pepper.  But our chef really knows his stuff with white wine, so he opted for sautéing.  However, he became dissatisfied and focusing on his steak sauce (to die for), requested that I "fix it." So I added shredded parmesan and, of course, more butter. That worked. 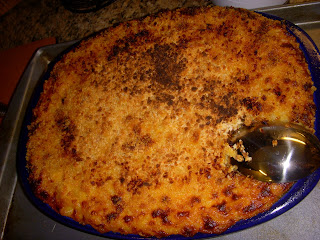 The cheese 'n mac. I made the roux, added the cream/milk mixture, stirred, and then, decided that it was never going to thicken enough. As there was no burner room to make a second roux and blend that into the existing thin mix, I added a bit of the warm mix from the stove to a lot more flour in a bowl. Then, a little more liquid. And a little more. Eventually, the slush in the bowl was ready for incorporation into the pot of too-thin sauce. That worked.
I assured our amazing chef (my son) that the reason I could fix these dishes is because I had botched so many in my lifetime. What I seem to have learned more than how to perfect the perfect dish is how to rescue a near-disaster and present a solidly good dish. As we all know, the difference between the perfect dish and a solidly good dish is no quiddity. So lacking a sense of culinary heroism, I began to read the latest New Yorker food issue. Two articles, although more feuilletons than classic journalism, palliated my shame.
Article one chronicled its author's laborious attempts to recreate Thanksgiving dinners/celebrations all over the world. Even though I'm all about the food, I quickly gathered that I was no match for her turkey obsession. Hours driving around the countryside, cajoling merchants, and reconstructing family menus might have been better spent enjoying the preparation, presentation, and party. Three words of advice sprang to mind in light of our impromptu DC dinner: family and friends.
Article two speculated that cookbooks are designed to give the illusion of a great dish, but not the directions to create said dish. The photos, the anecdotes, and the step-by-steps all amount to only deceptive or evanescent promises. So why do we continue to read them? I imagine that it’s because reading cookbooks, like watching romance movies, affords us the perfect fantasy. We escape and embrace rescue.
I recently returned from New Orleans where I took two cooking classes at the New Orleans School of Cooking and learned about Creole and Cajun cooking. Additionally, I picked up a tip for perpetuating that cookbook fantasy for my own guests. No matter what, the teacher insisted, proclaim that you're serving "the best ________ you've ever had." Why not? What's the point of my usual self-deprecation about missing ingredients, spatchcocked methods, or bowdlerized mise-en-place? Instead, I will heretofore proclaim, "This is the best cheese 'n mac you've ever had!"
(Cheese 'n mac? Yes, it's so cheesy that the noodles seem an afterthought. As J. wisely advises, you can never have enough cheese.)
from my word-for-the-day or Merriam-Webster...
Bowdlerize: to remove or change parts (of a book, play, movie, etc.) considered objectionable
Evanescent: tending to vanish like a vapor
Euphony: pleasing or sweet sound, esp. by words.
Quiddity: trifling point
Feuilleton: work of fiction catering to popular tastes

from my memory...
spatchcocked: two things inappropriately forced together ungraciously, uncomfortably, or awkwardly
Posted by justme at 11/25/2009